It can be very tempting to turn an extremely adorable and friendly stray cat into a pet. However, if the feline is a female and looks like it’s already in its reproductive years, it may have a litter of babies somewhere. And now, you may be wondering about the steps on how to tell if a stray cat has kittens.

Welcoming a stray cat into your home is both a noble and rewarding deed. However, it’s a completely different matter if it has kittens. The cat will keep on looking for ways to escape and go back to its youngsters. And if it’s unsuccessful, its kittens are likely to die. Without their mother’s milk, kittens perish anywhere from 12 hours to two days.

So, if you are tempted to adopt a stray cat but fear that it may have kittens, read on. Below, you will come across answers to some of the most pressing questions about this matter.

Telltale Signs That a Stray Cat Has Babies

Hearing or seeing a litter of pawed newborns is a definitive sign that the stray cat you are considering to turn into a pet has kittens. It is up to you if you will leave the stray cat alone to let it carry out its mommy duties until her kittens are old enough to take care of themselves or adopt it and every single one of its babies, too.

However, it’s not all the time that a stray female cat will give birth where its kittens can be spotted without trouble by humans and predators who would be interested in its little ones.

The nipples of a female cat become red and enlarged as early as two weeks of pregnancy. The breasts stay larger than usual after giving birth until around the tenth week. When its kittens are ready to move away from their mother during the tenth week, it’s not unlikely for a mother cat’s breasts to have completely run dry.

Even if some or all of its kittens die, the breasts of a stray female cat will remain engorged.

When the body senses that no babies are sucking at the teats, the mother’s body will stop producing prolactin, the hormone responsible for breast milk production. The stray cat’s breasts will gradually shrink.

Does it seem like the stray cat has lost a lot of weight after just a few days of not seeing it? Then it may not be obese the last time you came across it — the feline must have been pregnant.

In female humans, it can take up to six long weeks before their tummies fully return to their pre-pregnancy size. Well, in female cats, the same is true. However, the process tends to be a lot shorter. It is very much possible for the belly of a stray cat that just had a litter of kittens to shrink back to its normal size within just a week.

Some of the weight loss is also likely due to the stress and fatigue of giving birth. Paired with the need to produce breast milk, it doesn’t come as a surprise why the next one is also a telltale sign that a cat has kittens.

When it’s not busy feeding and keeping safe and warm its litter of kittens, a stray cat that has just given birth will look for food frequently. That’s because it needs a lot of calories and nutrients not only to help its body bounce back from the trauma of pregnancy and labor but also to encourage its breasts to produce breast milk.

It’s for this reason why you may frequently spot the stray cat looking for food. Or, if it’s your habit to put out food for it, the feline may try to get your attention more often.

When feeding the stray cat, focus on giving it food that’s high in calories and nutrients. It’s also a wonderful idea to provide it with clean drinking water — it needs to stay hydrated for proper breast milk production. By the way, a pregnant cat will be very thirsty and drink more water than usual one day before giving birth to its kittens.

The stray cat will have some bleeding in the vaginal area after having a litter of babies. This is normal and can be expected to go on for several days, usually about a week, after giving birth.

However, it is a completely different matter if you notice that the female cat is bleeding for more than one week. More often than not, it’s a sign that something is not right. One very common reason for prolonged vaginal bleeding after delivery is a retained placenta. Consider getting in touch with a veterinarian to have the stray cat examined.

The above-mentioned signs are the ones that you may look for in a stray cat to have an idea of whether or not it has kittens. And now, you may be wondering if a feral cat will exhibit the same signs after having babies. And this brings us to this important question…

How can you tell if a feral cat is still nursing?

Like a stray cat, a feral cat nurses its babies for eight to ten weeks. It’s because of this why, for several weeks, its breasts appear engorged. On the other hand, its body seems to have lost weight. A feral cat also looks for food while still nursing, although it usually does so only at night.

Although a friendly stray cat with kittens may allow you to touch it for a closer inspection, especially if it’s familiar with you, refrain from touching a feral cat to check whether or not it has just given birth.

FAQs About a Stray Cat With Babies

Adopting a stray cat is one thing. Adopting a stray can with babies is another. The presence of a litter of kittens somewhere can make things complicated. Besides the fact that the stray cat may not show full willingness to get adopted, its little babies will die due to hunger or being preyed upon by predators.

The following are some of the most frequently asked questions (FAQs) about a stray cat with a litter:

Should I follow a stray cat to know where its kittens are?

When following a stray cat to locate where its litter of kittens are, do so discreetly. Otherwise, if the mother cat notices that it’s being followed, it may head elsewhere to keep its litter safe. But if a stray cat has trust in you, it may be more than willing to lead you to where its kittens are.

Sometimes, if it likes a person, the stray cat will bring its kittens one by one on his or her property.

Is it okay to touch the kittens of a stray cat?

Never touch the kittens of a stray cat, let alone come close to them, if the mother doesn’t seem to trust you. If you’re not welcome to touch its babies, the stray cat won’t think twice about scratching and biting. Contrary to popular belief, a mother cat won’t kill its kittens if humans touch them.

If the mother cat doesn’t like you touching its little ones, it may take them to another place once you go away.

Can I transfer a stray cat and its kittens to a safer place?

Provided that the stray cat isn’t exhibiting signs of hostility, you may take it and its litter to a safer place, such as somewhere on your property. Provide them with a home in which they can feel safe, like a box. Also, provide the mom with food and water to make it and its babies feel welcome.

Keep in mind that a stray cat may relocate its little ones if it doesn’t like it where you transferred them.

Is it okay to take the kittens to a shelter for adoption?

A mother cat will keep on taking care of its youngsters until such time that they can stop drinking her milk and start taking care of themselves. If the kittens are old enough to survive without their mom around, a stray cat won’t mind if you take its babies to a shelter to put them up for adoption.

Make sure that you take a stray cat’s grown-ups to a no-kill shelter where they are out of harm’s way.

What will happen to the kittens if I adopt their mom?

If the kittens are less than eight to ten weeks old, they will die without their mother’s breast milk and protection. However, they can have a fighting chance if someone takes good care of them properly or takes them to the vet. On their own, the kittens have very little to no chance of surviving.

Prior to attempting to adopt a stray cat, make sure it won’t be leaving behind any kittens.

Just Before You Adopt a Stray Cat

If it seems like a friendly or miserable female cat wants you to adopt it, make sure that it doesn’t have babies that it will be leaving behind. Above, we discussed some of the signs that a stray cat has kittens. If it doesn’t seem to have any of those telltale indicators, check that it’s not someone else’s cat before you welcome it into your home. 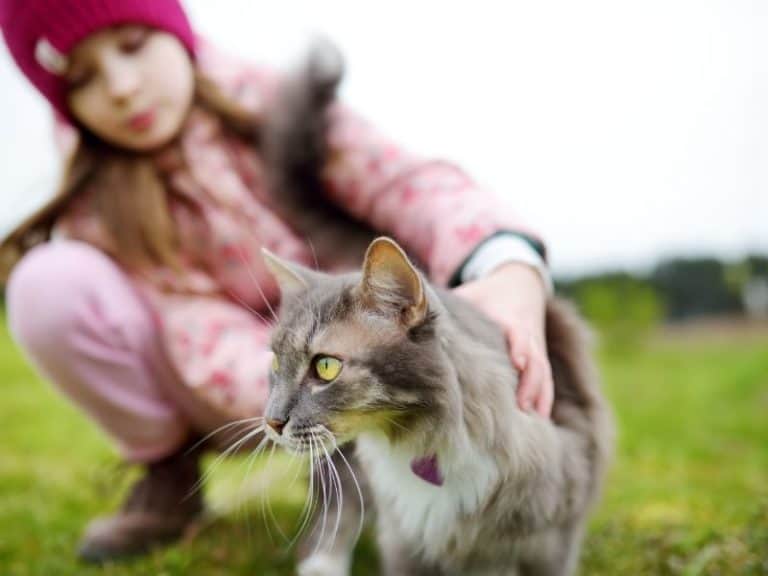 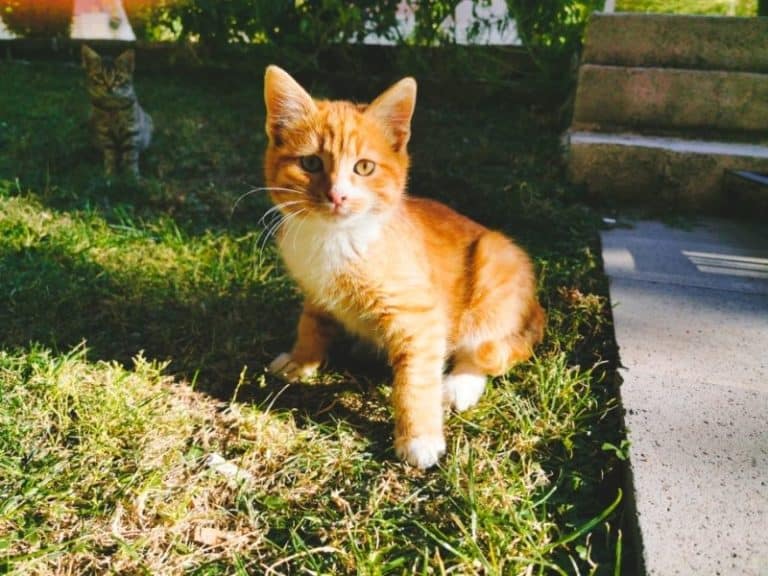 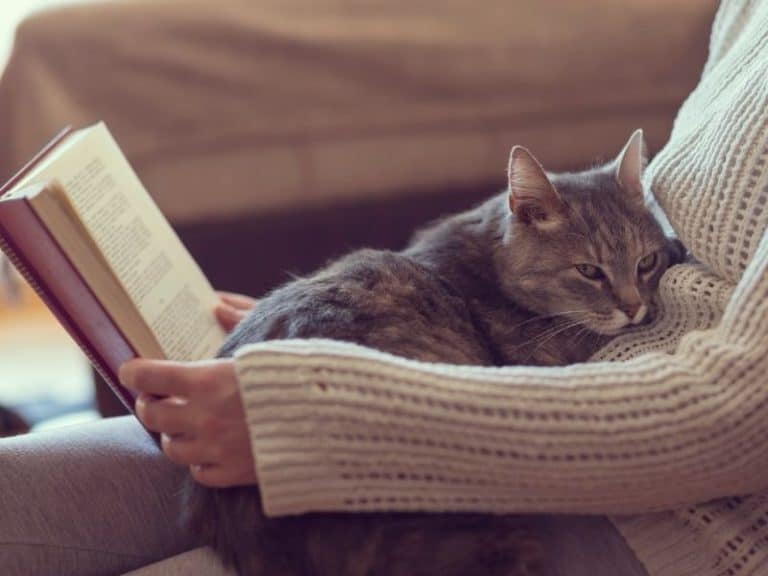 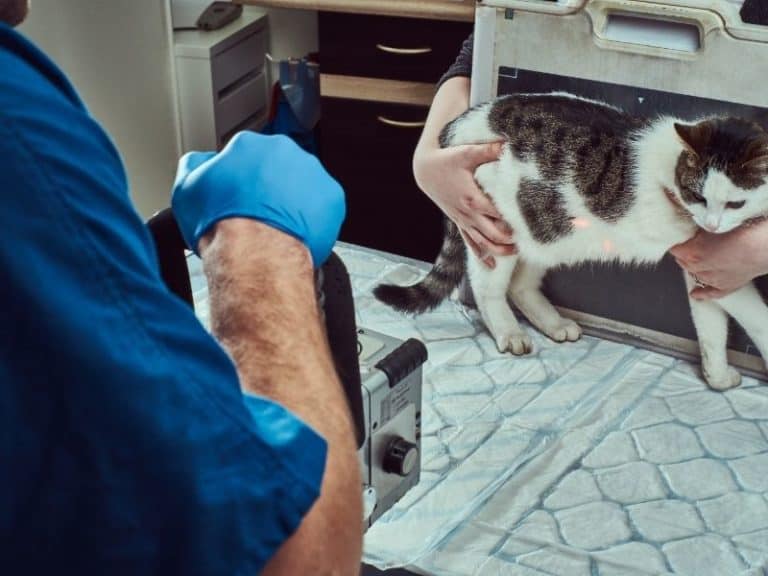