Can you resist them?

But if Buddy’s begging for your chocolate ice cream, stop! Especially if it’s dark chocolate.

Chocolate is among the top ten human foods most toxic to dogs. Dogs can’t handle two substances found in all chocolate, theobromine, and caffeine. The darker and purer the chocolate, the higher the concentration of theobromine and thus the more toxic it is for dogs.

To learn why that’s so, let’s take a quick look at how chocolate is made.

All chocolate products are made using varying proportions of two components extracted from the cacao bean: the brown, solid cocoa mass, and the pale, liquid cocoa butter.

Cocoa powder is nothing but cocoa mass, baking chocolate and dark chocolate have a high concentration of cocoa mass, milk chocolates less, and white chocolate is made using only cocoa butter.

The theobromine and caffeine content of chocolate is concentrated in the cocoa mass, while cocoa butter contains a much smaller quantity.

As you might expect, the most toxic form of chocolate for dogs is cocoa powder.

This can contain a whopping 2,622 mg of theobromine per 100 grams of powder, depending on the brand. As more ingredients are added to a product, the concentration goes down.

A cup of rich chocolate ice cream has about 178 mg of theobromine.

Theobromine poisoning can cause Buddy to vomit, have diarrhea, become restless, bloated, hyperactive, have tremors and even seizures, and with a large enough dose, die.

If your dog stole your chocolate ice cream without your knowledge, symptoms will show in six to twelve hours.

How Much Chocolate Ice Cream Will Kill a Dog?

The amount of chocolate needed to make a dog sick depends on the weight of your dog. At 9 mg per pound of the dog’s weight, your dog can get mildly sick. At 18 mg per pound, your dog can have severe symptoms. More than this can be fatal, with seizures occurring at about 30 mg per pound.

Given that a cup of dark chocolate ice cream has 178 mg of theobromine, this is enough to make a 9-pound dog seriously sick and could easily kill a tiny dog like a Maltese.

By comparison, an average Labrador Retriever (67 lb) would have to eat 7-8 cups to suffer the same effects.

But how about a lick?

Just one, promise, your pup asks with those melty goo-goo eyes.

A single lick of chocolate ice cream contains so little theobromine it shouldn’t be a problem for most dogs.

On the other hand, you don’t want Buddy developing a taste for the stuff, do you?

Play it safe and keep chocolate in any concentration away from your dog. If Buddy insists, you can give him a treat instead.

Here’s a table of common chocolate products and their theobromine concentrations:

If your dog ate chocolate in any form, you can use this online toxicity calculator to predict the effects.

However, just because your dog stole a milk or white chocolate ice cream cone with lower theobromine levels doesn’t mean you have no cause for worry.

You’ll also have to consider what else was in that ice cream.

At the very least there’s sugar and fats, and white chocolate can contain enough fat to give dogs pancreatitis. Some nuts are bad for dogs, such as macadamias.

How Much Chocolate Ice Cream Can Dogs Handle

As mentioned above, it takes about 9 milligrams of chocolate per pound of body weight to make a dog sick. Below this amount, you likely won’t see symptoms of theobromine poisoning unless your dog happens to be especially sensitive.

Based on an average of 178 mg theobromine per cup of dark chocolate ice cream, here’s the maximum amount your dog might safely eat without your having to run to the vet*:

*Computed at 5 mg theobromine per pound of body weight, amounts based on dark chocolate ice cream.

For ice creams with lower chocolate content, the safe amount can be up to double.

Bear in mind that this is only factoring in chocolate content. Ice cream may contain other substances that are harmful to dogs, such as macadamia nuts, and in any case, the sugar and fat in ice cream are rather overwhelming for a dog.

Signs of Chocolate Poisoning in Dogs

What if Buddy got into the pantry and found your stash of chocolates while you were away? If your dog ate a harmful amount of chocolate, you may see the following symptoms some 6-12 hours later:

By the way, if you keep both dogs and cats you should know that chocolate is even more toxic to cats.

They display the same symptoms that dogs do, but it takes much less chocolate to make them seriously ill. It takes only 100 mg of theobromine per pound body weight to be lethal to cats.

However, since cats can’t taste sweetness they’re much less attracted to chocolate than dogs.

What Should I Do If My Dog Eats Chocolate?

If your dog ate chocolate, or you suspect your dog has eaten chocolate, try to find out what it was he ate.

Look for the wrapper and bring it with you if you take the dog to the vet. If you can, try to estimate how much the dog ate. A little amount for a medium or large dog is unlikely to be a problem. Observe the dog’s symptoms if any.

If your dog has consumed a significant amount of chocolate or shows signs of a toxic reaction such as vomiting, diarrhea, or bloating, it’s an emergency. If there’s a veterinary clinic nearby, take the dog there immediately. Your veterinarian is best qualified to determine what needs to be done.

If there’s no vet within easy reach, you have to get the chocolate out of your dog’s system by making it vomit.

Here’s the recommended first-aid procedure for chocolate poisoning if you can’t reach a vet:

How is Chocolate Poisoning Treated?

There is no antidote to chocolate poisoning for dogs. To treat an overdose of chocolate, veterinarians try to remove the chocolate from the dog’s system by induced vomiting if possible, or by feeding it activated charcoal to absorb the theobromine. If necessary the vet may administer a gastric lavage.

This primary treatment is complemented with supportive care such as giving an intravenous drip to prevent dehydration, and specific medications are given to relieve symptoms like erratic heartbeat or seizures.

Your pet can be severely weakened by a brush with theobromine poisoning, so you may have to leave it at the veterinarian’s clinic for several days. Depending on the severity of the poisoning, treatment can cost from a hundred dollars to several thousand.

If your dog consumed a very large dose for its size or has a weakened constitution from illness or age, chocolate poisoning can be fatal.

How to Avoid Chocolate Poisoning in Dogs

Dogs have no idea that chocolate is bad for them.

Indeed, chocolate is as tempting your doggo as it is to you!

Dogs are omnivores that evolved to eat fruit as well as meat, so sweet and sticky foods like chocolate ice cream appeals to them. They’re also attracted to the milk in milk chocolates and ice cream.

But the biggest reason your dog finds chocolate appealing is because you enjoy chocolate!

Dogs are geniuses at reading our body language, and we likely give other clues as well when we eat something enjoyable. If Buddy sees how much fun you’re having licking that chocolate ice cream cone, he’s going to want some!

To protect your dog from chocolate poisoning, you have to take precautions to prevent them from ever eating chocolate.

Secure your pantry, and keep an eye on the counter when you’re baking brownies!

If you have any doubts about what skilled and determined food thieves dogs are, check out this rib-busting video:

What Other Human Foods are Bad for Dogs?

Chocolate isn’t the only thing you eat that may harm your pooch.

Some of our foods are outright toxic to dogs, such as raisins, some can cause physical harm like splinters from chicken bones, and some are just too high in fat, salt, sugar, or other substances for your dog’s health.

Here’s a list of foods you shouldn’t let Buddy steal:

I hope we’ve convinced you not to share your chocolate ice cream with Buddy.

However, if he’s still making those puppy eyes at you every time you grab yourself a cone, how about making ice cream Buddy can eat?

You can make lower-sugar, no-chocolate no-dairy ‘ice creams’ that both you and your furbabies can enjoy. 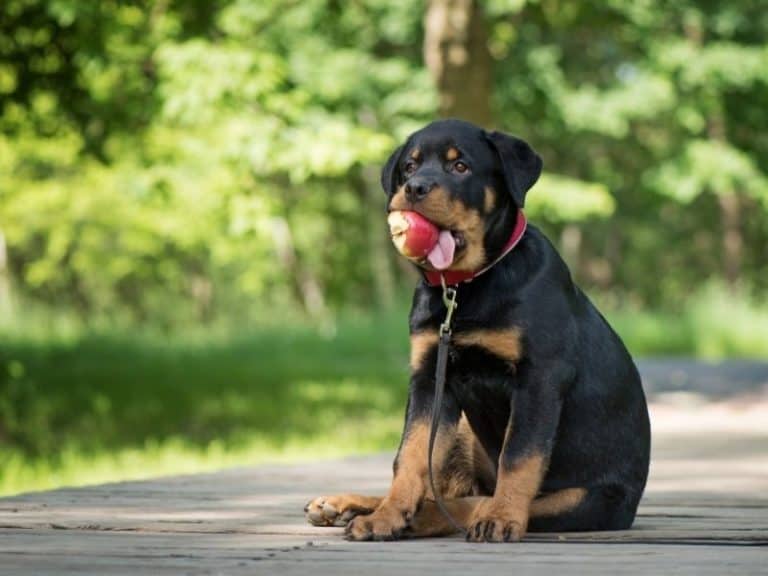 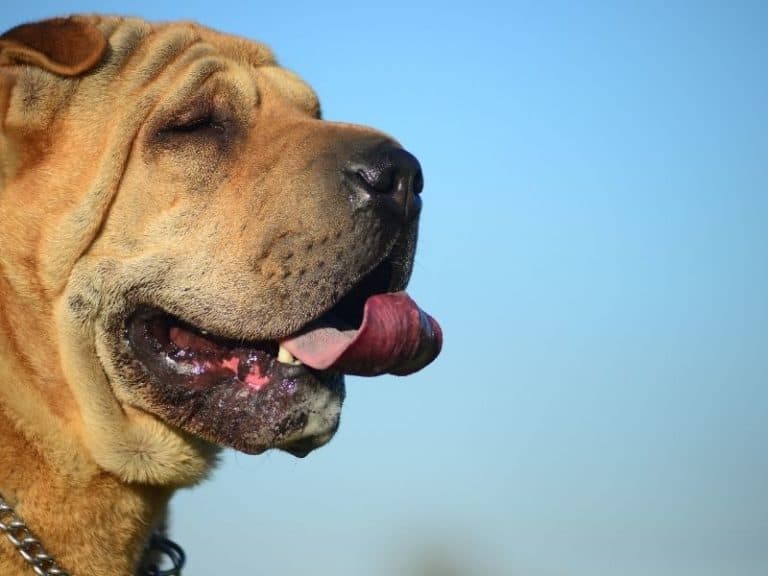 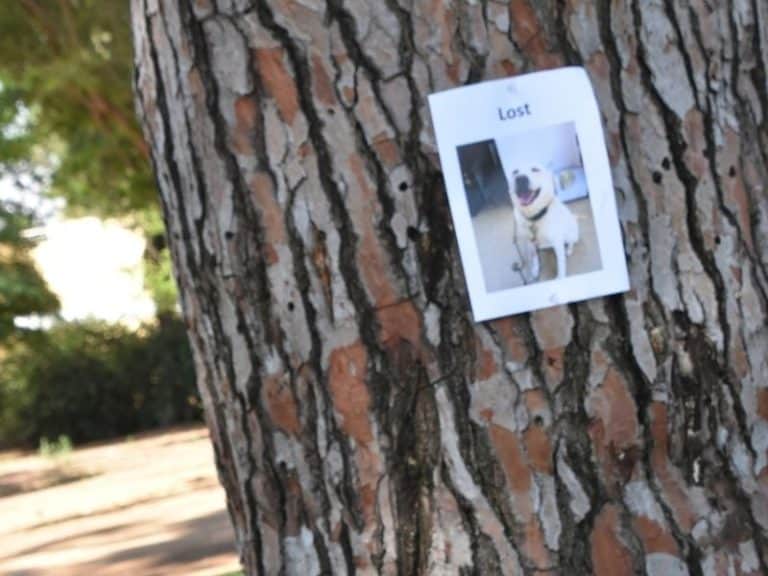 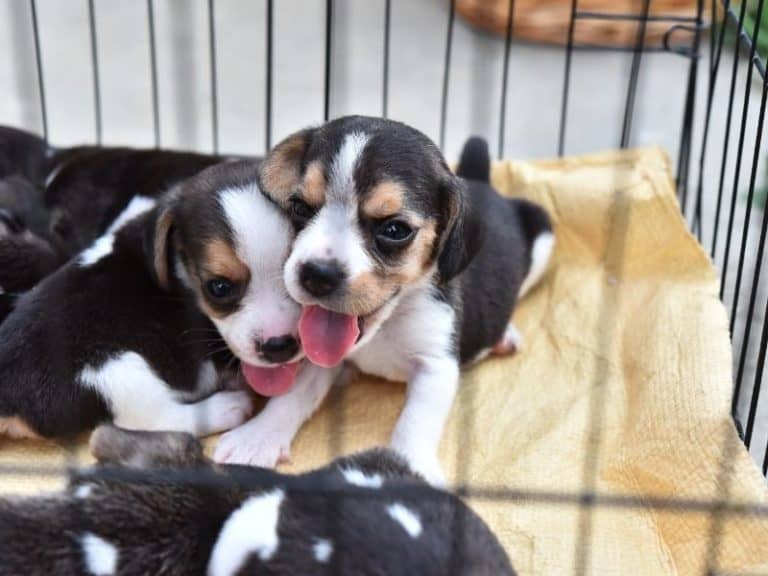